The main focus on this article is not to make a winter forecast, but  to explore what effects El Nino's and teleconnections have on winter weather across the southeast. One of the main sources of data in this report comes from a weather friend of mine that I call "Brother Larry". Larry would prefer to remain anonymous, so from here on out you'll hear me refer to Larry as "Brother Larry". 🙂  Larry has a wealth of information about the weather history in Georgia, and I'll be using a lot of his findings to help give you an idea how this winter may turn out, based on the environment created by the El Nino, as well as several other factors. Again, this data is based on analog years, or those years that most closely identify with the current patterns, so keep that in mind. Analog's are not perfect, but they do give us a very good idea about how things have happened in the past and how they may happen again in the future.

Again, almost all of the text below (other than a few of my own edits and additions) is from Larry, and he gets all the credit for the research and stats.

This data was compiled by taking a list of 26 “cold” US winters (Dec/Jan/Feb) since 1894 -1895 (i.e., the coldest 23%) for the eastern third of the US. This requires solid, widespread, below normal anomalies, and requires the southeast to be pretty chilly itself. The two maps to the right were created with data from the list of years below, but that dataset only goes back to 1948, so the maps I'm displaying are not 100% complete with the years in the list. Here's the list of those winters, and you can see the years I used on the maps themselves.
Also, Larry's 26 coldest winters study was done the better part of 10 years back, since then, it is possible that some of 09, 10, 13, 14, etc. could be added, although he is not reassessing those now.

While it's easy to look at one specific weather pattern, there are many factors that determine how a winter will turn out, with the ENSO state being just one of those. But there are other teleconnections and long term patterns that also have an effect on our winter weather, and they all work in tandem with each other.  Graphs and Charts

Now we are going to turn our attention to the PDO state or Pacific Decadal Oscillation. First, the definition from the National Center for Environmental Information:

"The Pacific Decadal Oscillation (PDO) is often described as a long-lived El Niño-like pattern of Pacific climate variability (Zhang et al. 1997). As seen with the better-known El Niño/Southern Oscillation (ENSO), extremes in the PDO pattern are marked by widespread variations in the Pacific Basin and the North American climate. In parallel with the ENSO phenomenon, the extreme phases of the PDO have been classified as being either warm or cool, as defined by ocean temperature anomalies in the northeast and tropical Pacific Ocean. When SSTs are anomalously cool in the interior North Pacific and warm along the Pacific Coast, and when sea level pressures are below average over the North Pacific, the PDO has a positive value. When the climate anomaly patterns are reversed, with warm SST anomalies in the interior and cool SST anomalies along the North American coast, or above average sea level pressures over the North Pacific, the PDO has a negative value (Courtesy of Mantua, 1999). "

Here's an analysis of the cold 26 winters by DJF averaged PDO status: Again, much as it was with weak Nino's, many of our coldest winters occurred during a + PDO state, while only 8 out of 57 occurred during a negative PDO state.

In order for us to get long lasting cold air that stays locked in, we need some blocking. There are several teleconnection patterns that aid in developing this blocking, one of which is the North Atlantic Oscillation or NAO. Graphs and Charts
Here's the definition of the NAO:
"The North Atlantic Oscillation (NAO) is a climatic phenomenon in the North Atlantic Ocean of fluctuations in the difference of atmospheric pressure at sea level between the Icelandic low and the Azores high. Through fluctuations in the strength of the Icelandic low and the Azores high, it controls the strength and direction of westerly winds and storm tracks across the North Atlantic. It is part of the Arctic Oscillation, and varies over time with no particular periodicity."
Strong positive phases of the NAO tend to be associated with above-average temperatures in the eastern United States and across northern Europe and below-average temperatures in Greenland and oftentimes across southern Europe and the Middle East. They are also associated with above-average precipitation over northern Europe and Scandinavia in winter, and below-average precipitation over southern and central Europe. Opposite patterns of temperature and precipitation anomalies are typically observed during strong negative phases of the NAO. For us, negative is what we're looking for in the winter.

Let's take a look at the analysis of the cold 26 Dec-Feb winters by averaged NAO status:
Again, a large number of the cold winters had a negative NAO.

Piecing It All Together... 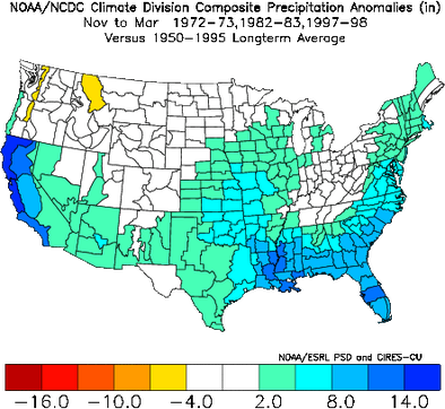 Now let's take the combination of the ENSO state (in our case, Nino), and factor in the PDO and NAO and let's see what we get. Here's the analysis of the 26 cold winters by a combination of Dec-Feb averaged PDO and NAO status: Things start to change a little. Obviously, the combination of +PDO and -NAO are the best combination, and that makes perfect sense. During the positive phase of the PDO, the wintertime Aleutian low is deepened and shifted southward, warm/humid air is advected along the North American west coast and temperatures are higher than usual from the Pacific Northwest to Alaska but below normal in Mexico and the southeastern United States. Add the effects of the blocking provided by the NAO and you lock in the cold air instead of having it rush out to sea.
Now, let's really lay it out.
Here's "Brother Larry's" analysis of the 26 cold winters by a combination of ENSO state and Dec-Feb averaged PDO and NAO status: